At night with Luís Rola

What is your name and artistic background?

My name is Luís Rola. I don’t exactly have an artistic academic background, but I play the piano, write, sing, and perform in amateur theater.

What is your current activity?

Which art projects were you involved in during the pandemic? Did you have any adaptations for the online context? How was the adaptation? And what were the main challenges faced?

In the 1st confinement, in April 2020, I released an album on my YouTube channel called “My Look” with piano versions of my songs.

Then, in January 2021, I started a unique and special project called “À noite com Luís Rola” (At night with Luís Rola).

It was a show in which I interviewed a special guest every week. For that, I involved people close to the guest, sending messages, questions, videos. There was always a musical part at the beginning of the show also, in which I played the piano.

The first season happened from January to March, totalizing 10 shows. Then, in September, I decided to come back in an even more professional format. For the second season, which lasted until the end of 2021, I’ve had partnerships and local business sponsors.

More recently, in October/November 2021, together with my friend Pedro Peralta, I’ve launched the “Fadistas do amor” (Love Fado Singers) project. Little after, our great friend Miguel Mendes joined the project. This project concept is a band of 3 guys that can do personal and private shows, the played songs are totally interactive with the audience (adapting the music lyrics with the name and profile of the audience). Most of the music are fun and can guarantee many humour moments and a funny atmosphere. Mostly we are invited to anniversary parties, Christmas dinners, etc.

Did you have to make any adaptation for the online context?

Regarding my big project, “At night with Luís Rola”, it was a project that didn’t exist before the pandemic, a project that was thought exclusively for the pandemic period. For this reason, and in this context, the whole conception of the program was made with the online mode in mind.

In the 2nd season of the program, I’ve already had several shows that were recorded in person, but the sharing system was kept online, on my Facebook page. However, I would say that I had to make an adaptation bigger than what I would ideally have done. As I mentioned, the show had a musical component at the beginning of each episode, about 15 minutes. I did it that way for technical and sound quality reasons. After calling the guest to the Broadcast, it was no longer possible to play the piano because the sound lost quality. For this reason, it was not possible to keep the musical moments throughout the format. In the shows that took place in person, we no longer had this problem.

How was the adaptation? What were the main challenges faced?

The main challenge was related to the show concept: to be able to reach people close to the guest every week.

All the preparation of the program depended a lot on what people gave me, and it wasn’t always easy to reach everybody.

I’m aware that in most shows people were left out, but that’s part of the process. It was a weekly format and the preparation time was 1 week. Then, there was often a certain pressure on the day of the show because most of the material (questions, videos, etc.) only arrived then.

But, for me, the most important thing was not to overlook anything that was important, so I could always manage.

To choose the guest was also a challenge sometimes.

Of course, not everyone feels comfortable and wants to expose themselves, and sometimes you hear a lot of no’s until a yes finally comes (laugh).

In the 2nd season I was getting advertising and sponsorship support (monthly package for all the shows during a certain month. From the feedback I received, I realized that the concept is very appreciated but that I have to reduce the length of the show. It’s worth pointing out that when you present something of value, you get support for it. And so I’d also like to leave this message: it is possible. You shouldn’t be afraid to ask for support, explain the concept, explain what you have to offer in terms of advertisement, and you will surely succeed.

What was the technical or general support needed for your creations? What digital resources and tools did you need?

The show was made 99% of the time in my house, in the first season exclusively online, i.e. calling the guest to the live broadcast via Facebook, and in the second season already with some guests in person at my house. So all the technical issues were solved and handled by me. Basically I had the piano, a small mixing table where I had connected some PC speakers (pretty cheap by the way!), the mic and the piano, and then a cell phone with internet connection to broadcast the show. It was done every week live on my Facebook profile. The poster t advertise it was made on CANVA. What I want to convey here is that you don’t need anything very sophisticated to do it.

What are the main differences between in person and online performances?

I think that the way you build the it in person is slightly different than online. Perhaps a little more interaction and complicity between you and the guest is generated. On the other hand, from a technical point of view, you can do things in person that you can’t do if your guest is online with you. But we’re talking about a show that was always broadcasted online and in which the changes between face-to-face and online had to do only with having the guest with me or not.

What are the advantages and disadvantages of each model (face-to-face and online)?

There are several advantages of online: the guest can be comfortably at home, just like everyone else who wants to watch, all they need is an internet connection and Facebook. By doing it online you reach a lot more people, and this is also the goal of the show, to be able to reach everyone close to the guest and beyond.

The big challenge has to do with technical issues, namely regarding sound or poor internet connection. Particularly, when you have to call a guest to the broadcast, you’re dealing with two internet connections, different spaces, and so on. So there are two aspects that you don’t control much – the technical issues that come from your side but also from the guest’s side.

As for the in-person model, besides some difficulties in finding a suitable scenery, there aren’t really any disadvantages to that model, at least the way I did it, since I always broadcasted live on Facebook. The big advantage is technical and is the fact of having the guest with me which makes interaction and the construction of the program a little different. 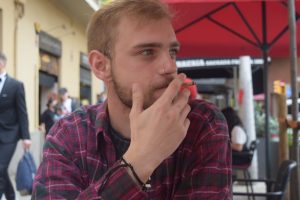 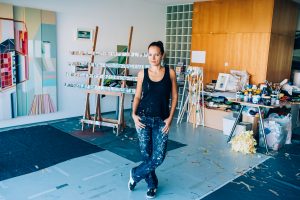 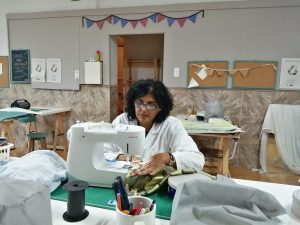 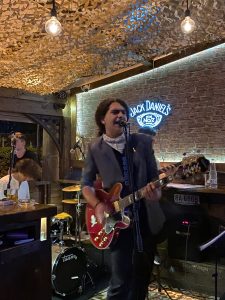 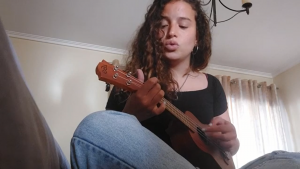